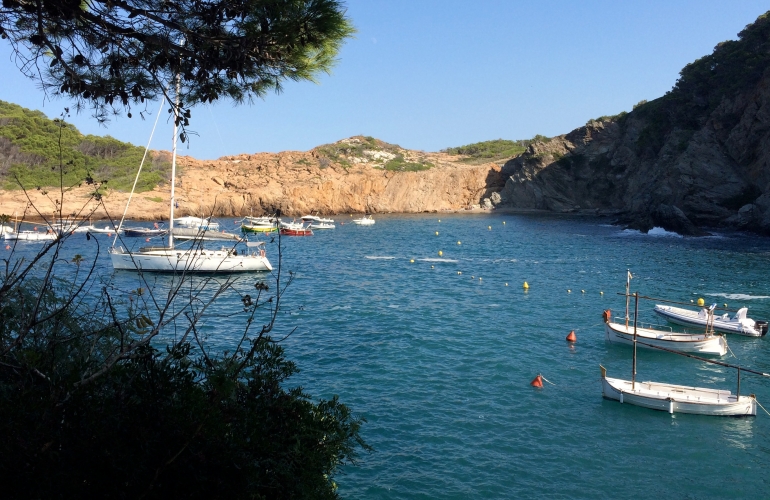 Almost three years ago, my now husband and I discovered a veritable gem in the Costa Brava … a five-room hotel above a restaurant in a cove on the coast of northeast Spain. We so were blown away by the tranquility of Hostal Sa Rascassa — the little nook that instantly erased the hustle and bustle of our New York City lives — that we are about to return for a weeklong vacation.

We’re, once again, looking forward to this warm welcome from the gracious owner, Oscar: 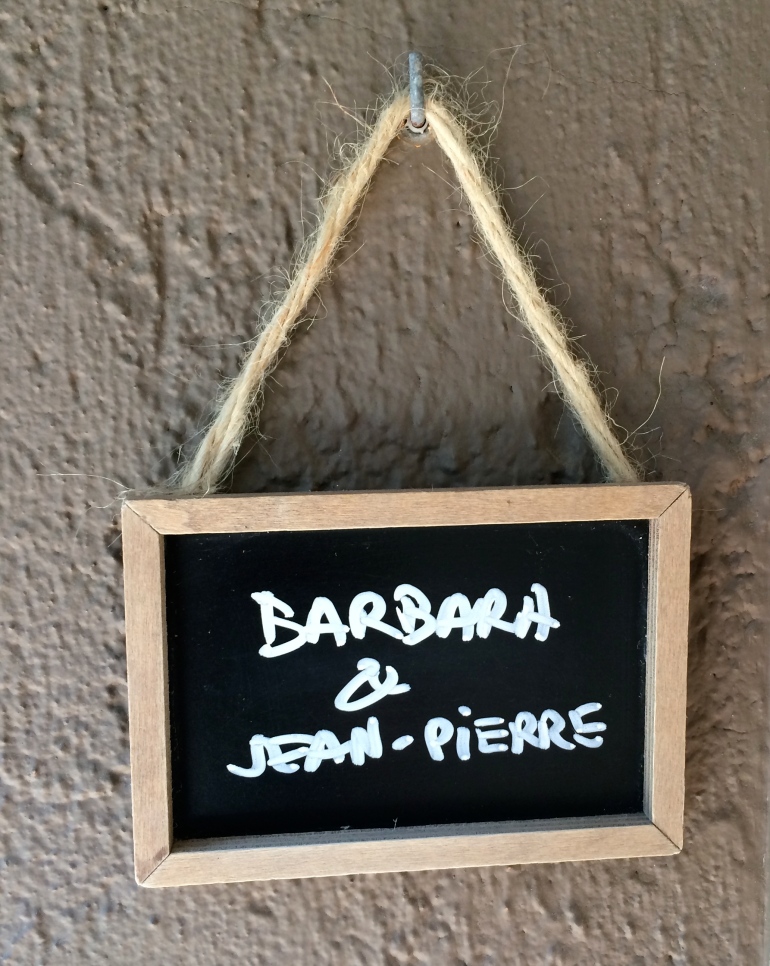 Little details like this sign outside our room (which greeted us after a roughly 95-mile drive northeast from the Barcelona airport into the hills and sea cliffs of the Costa Brava) are what make this hotel so inviting. The cozy rooms exude a rustic charm that reminds visitors to take in the natural beauty of the Cala d’Aiquafreda cove and the breathtaking views of the Mediterranean Sea. One of the most peaceful parts? The doors open to a shared terrace that leads straight down to the shore. 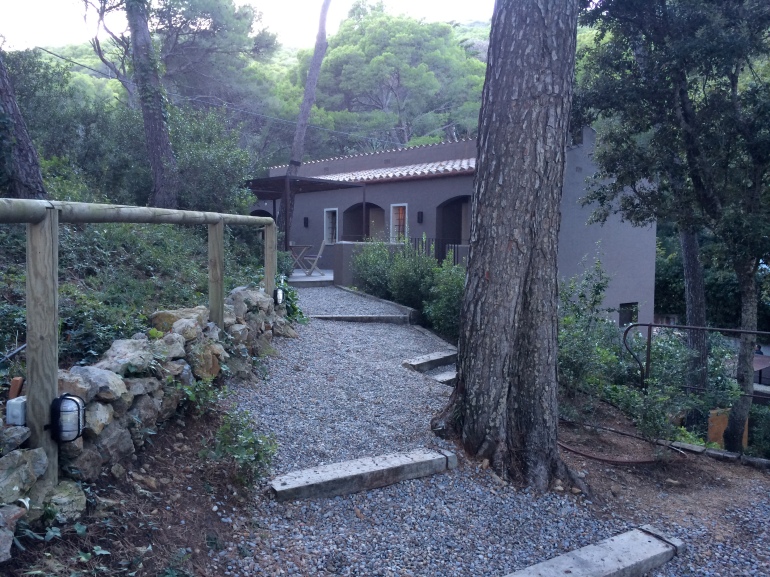 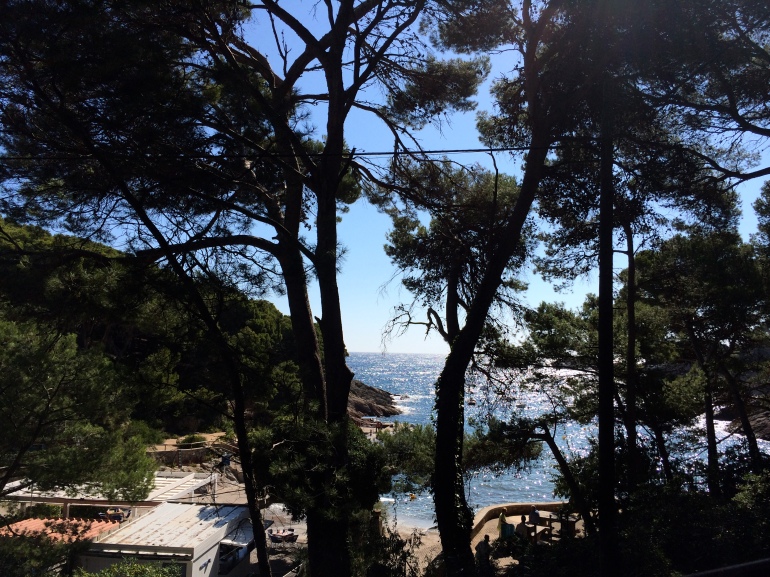 Exiting the terrace on the opposite end brings guests to Sa Rascassa’s superb restaurant, which serves modern Catalan food (think fresh razor clams and the freshest fish). Eating dinner in an outside garden with pebbles gently grinding beneath your sandals and the sound of waves crashing in the distance is a perfect first night introduction to the friendly hospitality and laid-back vibe that we found define the Catalonia region. 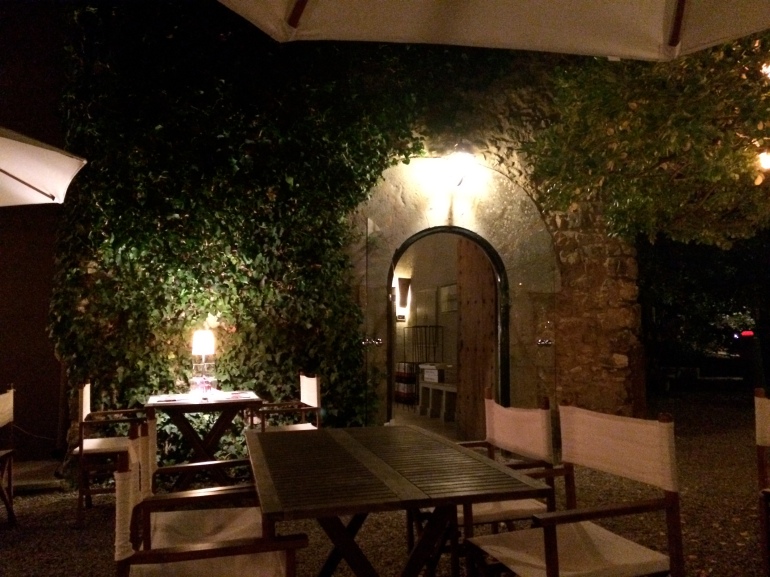 In the morning, the garden (where a complimentary breakfast of Spanish meats, cheeses, kiwis, coffee, juice, croissants are more is served) looks like this:

There is direct access to the sea (with the hotel’s beach bar just steps away), but most days, we walked along the sea cliff (with the hotel’s complimentary beach bag and towels in hand) to Sa Tuna — a somewhat rocky, yet comfortable and lively beach cove (lined with homes, restaurants, and bars) that is popular with locals and frequent travelers to the region.

The breathtaking views along the way simply speak for themselves … 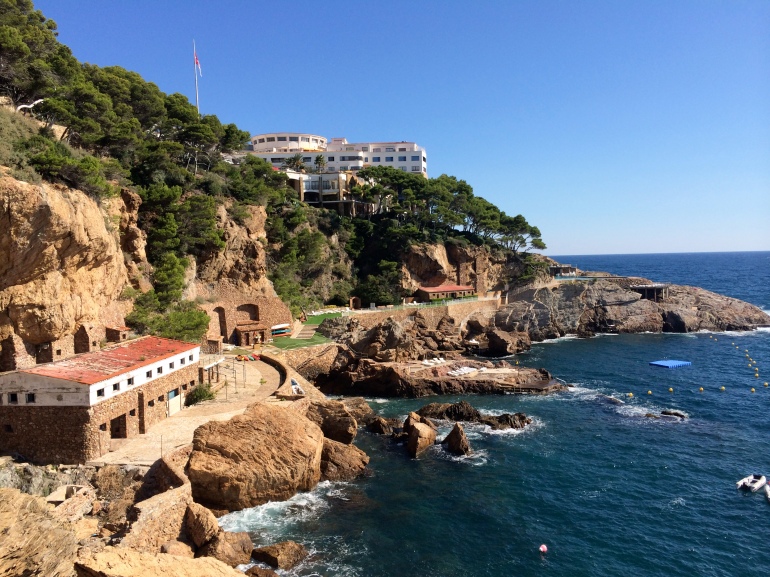 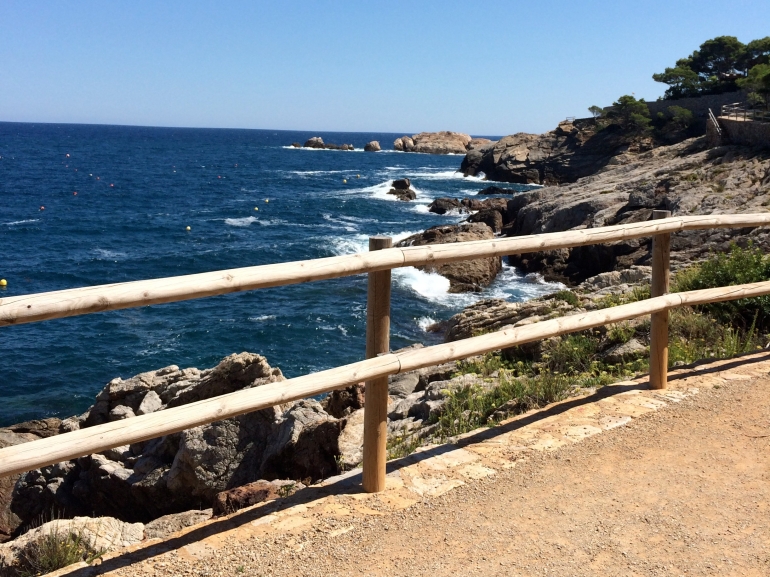 … as does the picturesque beach dotted with swimmers enjoying the last days of the summer season in early September. 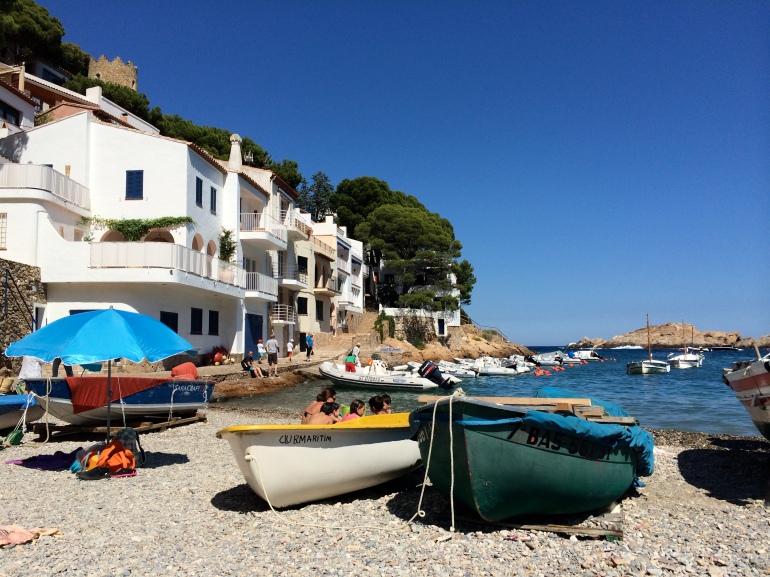 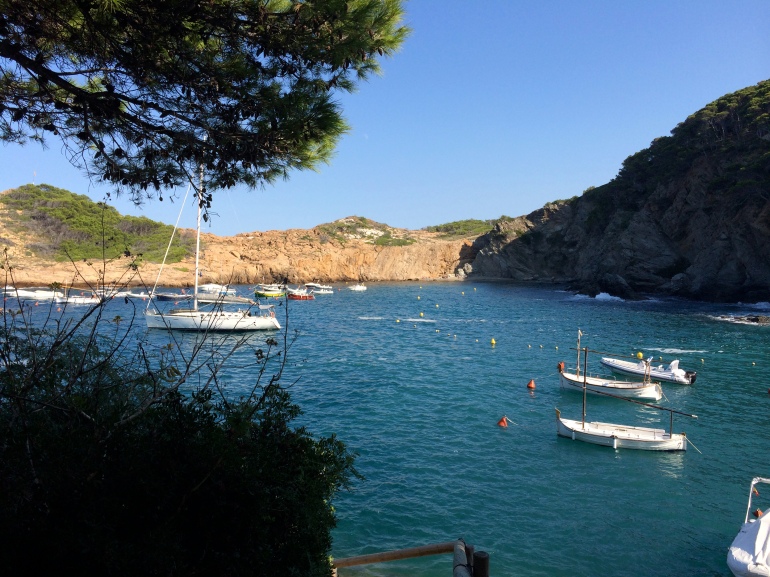 Sa Rascassa is in the municipality of Begur, but the actual town of Begur — a bright Catalan village bursting with Cuban influence — is roughly 4 miles up the hill and just a quick drive from the beach.

Girona, which is about an hour drive from the coast, is a city to get lost in … and I use “get lost in” figuratively because the old part of the city is rather easy to navigate. While my husband went on a bike ride in the hills outside the city (cycling culture is strong here), I quickly became a local … enjoying a pastry and coffee and walking through the winding streets and ancient stone staircases. 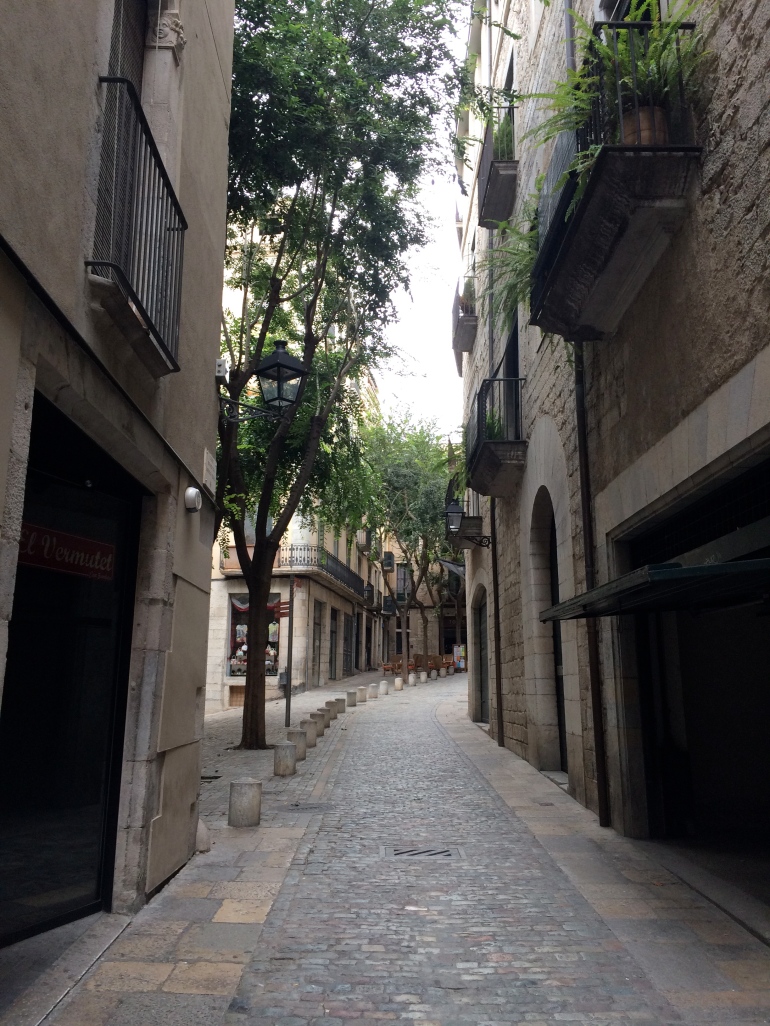 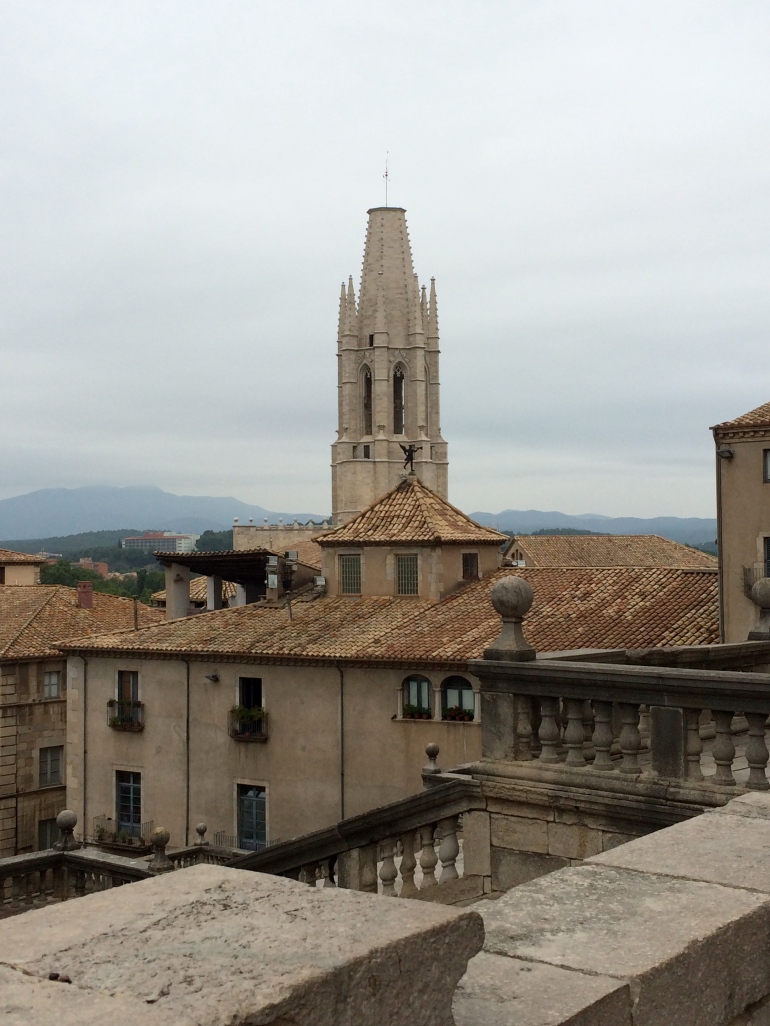 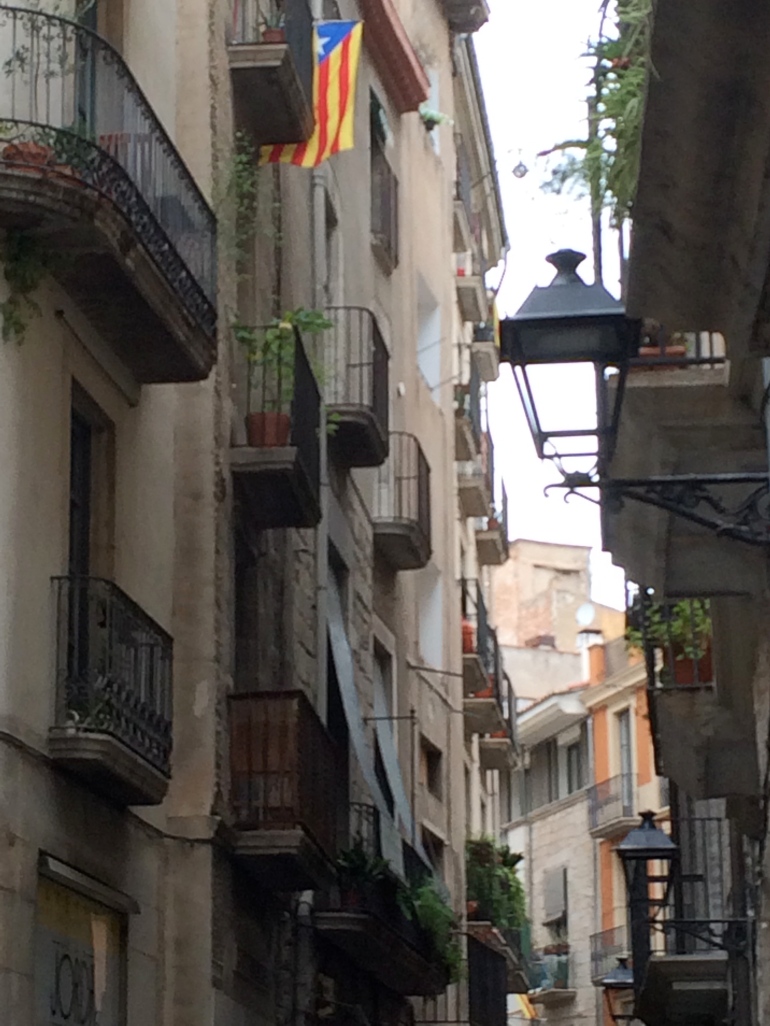 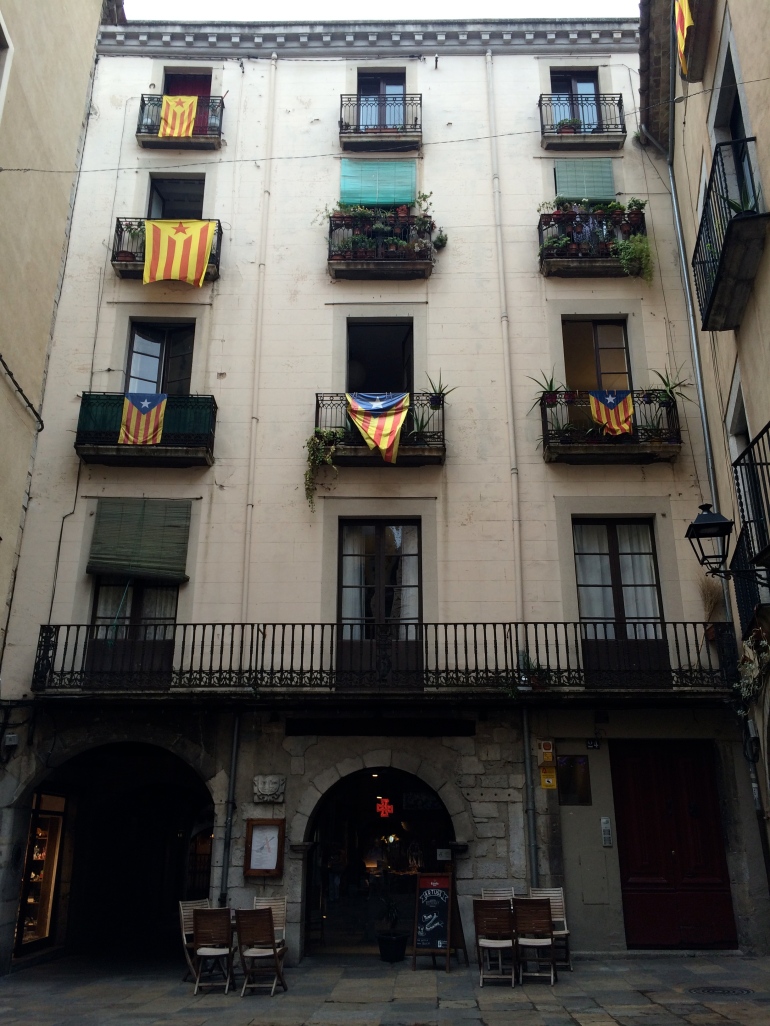 We reconvened to explore the city, especially the once vibrant Jewish Quarter, which is rich in both history and old-world beauty and home to the Museu d’Història dels Jueus. (The wonderful Museu d’Art de Girona is also nearby.) That night we stumbled upon a tapas bar near Nu restaurant, where we leisurely drank wine and beer and noshed on meets and cheeses with an after-work crowd.

Nu (which is affiliated with Michelin-starred restaurant Massana) lured us back the next night, and we weren’t disappointed. We indulged in foie gras prepared with cookies and banana ice cream (surprisingly delicious), a delectable board of cheeses, and prawn tempura among other dishes.

On the way to Girona we stopped in Púbol to visit the castle that Spanish surrealist painter and sculptor Salvador Dalí turned into a home for his wife, Gala. It houses various works of art (the medieval building briefly served as his workshop), Gala’s tomb, and many of their personal effects (like Gala’s couture dress collection … swoon). And the gardens, punctuated by his sculptures, are simply magnificent. 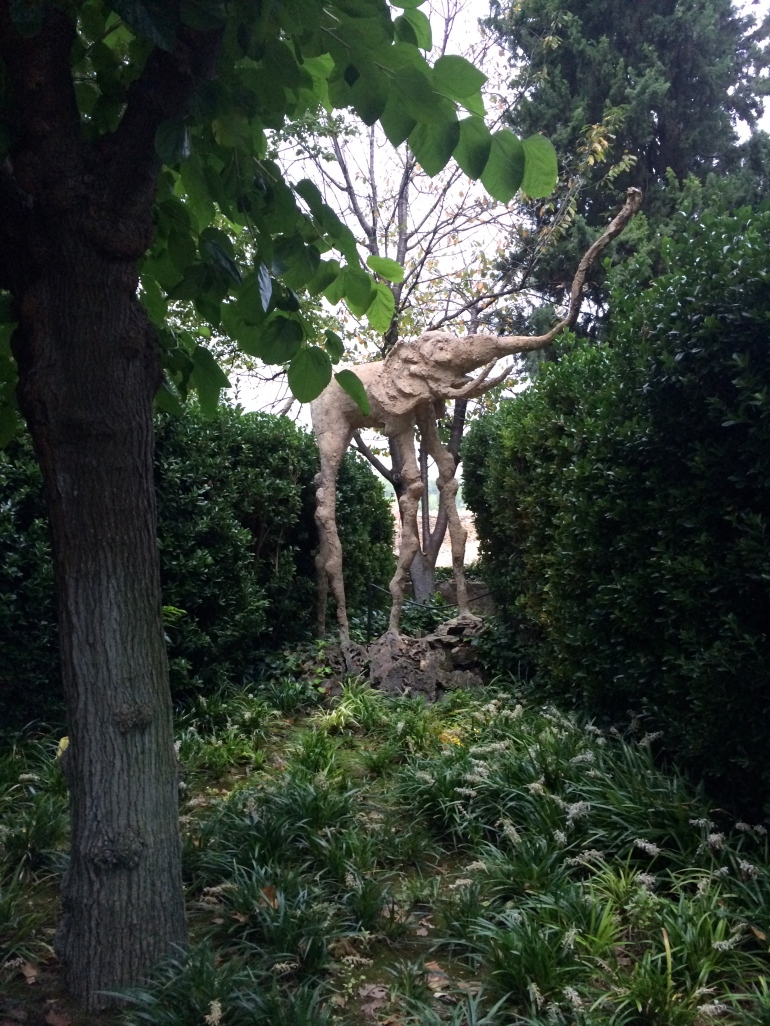 After five nights at our hideaway in paradise, we spent four nights exploring Barcelona, with most of our days in the neighborhoods of El Raval, Barri Gòtic, and El Born. Our daily treks were a bit more touristy than many of our city travels usually are, but neither of us had been there — and, well, when in Barcelona.

The food is definitely one of the city’s biggest draws. Our most enjoyable dinner was in the bar room at Bar Cañete (in El Raval), where we shared tapas and wine in a bustling, lively environment. We loved this meal so much that we’ll be returning to Barcelona for just one day to indulge in some of the most delicious croquetas de jamón and fried eggplant with honey we’ve ever tasted. (Stay tuned for an update.)

If we had more time, we’d also return to Bar Mut, a wine and tapas hotspot in L’Eixample with delicious food (think braised octopus and razor clams). The best part, though, was being invited into the restaurant’s private bar (Club Mutis) for a drink and some live jazz on our last night in Barcelona.

For lunch, La Pubilla in the Gracia neighborhood was a scrumptious steal with a three-course menu del dia. We sat at the bar (the restaurant was packed!) and were served huge portions of traditional Catalan fare in a beautiful part of town (although only 30 minutes from the famed Park Guell) that seemed less-traveled by tourists.

Breakfast was delightful at Forn de Sant Jaume, a patisserie that satisfied our craving for traditional Catalan xuixo (a fried pastry filled with creme and topped with sugar) and ended up being a perfect place for people watching. 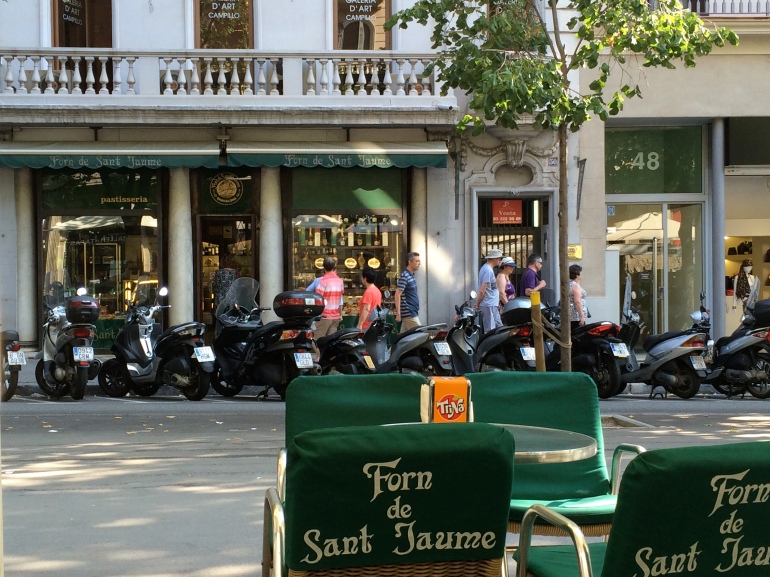 Barcelona isn’t just about pastries, wine, and tapas. It’s about the vibrant Catalan culture visible in the city’s architecture and art. If there is one museum to wait on line for, it is Museu Picasso — a comprehensive oeuvre of Pablo Picasso’s work, especially highlighting his days in Barcelona. Both the obsessive Picasso fan (here, here!) and the casual museum-goer will spend hours in this incredible space in the El Born neighborhood.

Modern and contemporary art aficionados will also want to visit the Museu d’Art Contemporani de Barcelona (MACBA) in El Raval. The sleek and light-drenched building, designed by Richard Meier, sits on Plaça dels Àngels. This is the view of a building adjacent to the museum:

Of course, the distinct and colorful design of Catalan architect Antoni Gaudí permeates the city from La Sagrada Familia (a massive Roman Catholic church this is still under construction) … 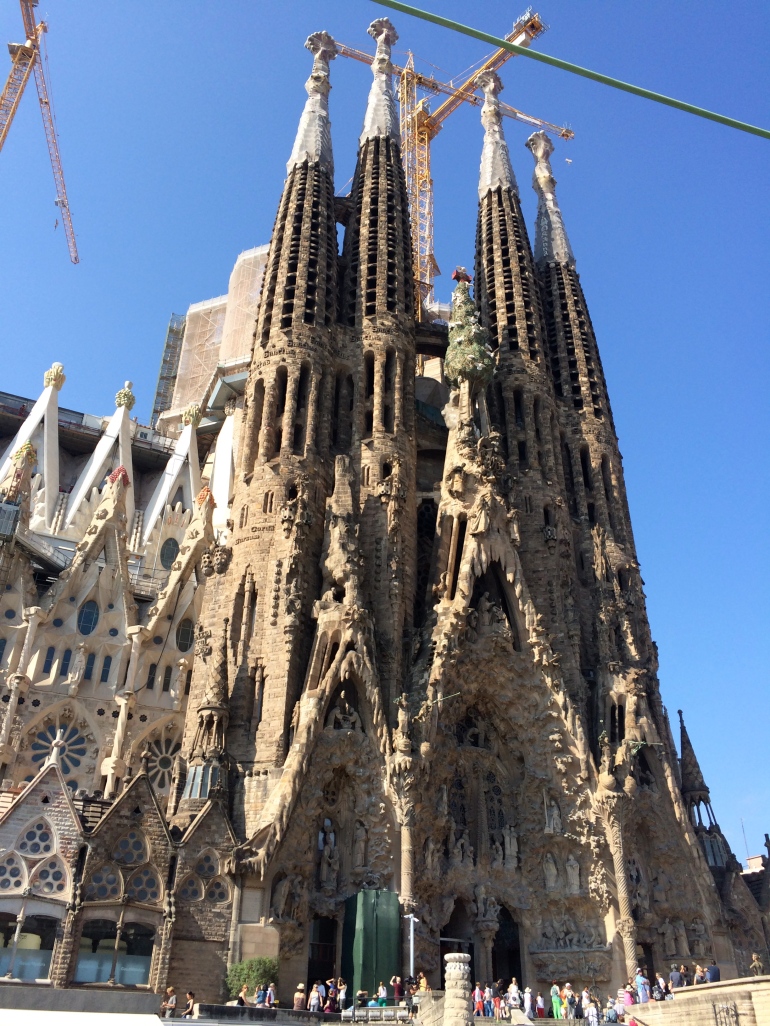 .. to Park Güell. The park (built in the early 1900s) was originally intended to be a housing development (that includes Gaudí’s own house, now a museum), but it was turned into a fanciful public garden on a hill in northern Barcelona. These photos hardly do justice to the expanse and hidden whimsy tucked into every corner: 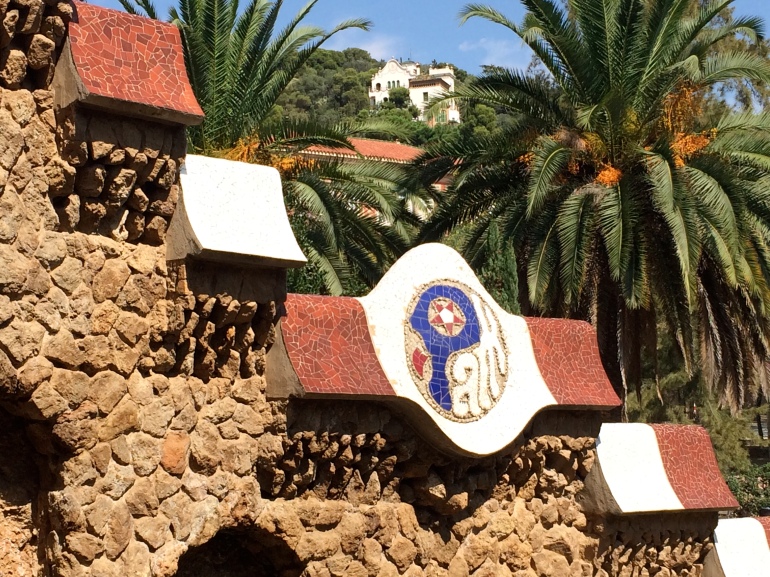 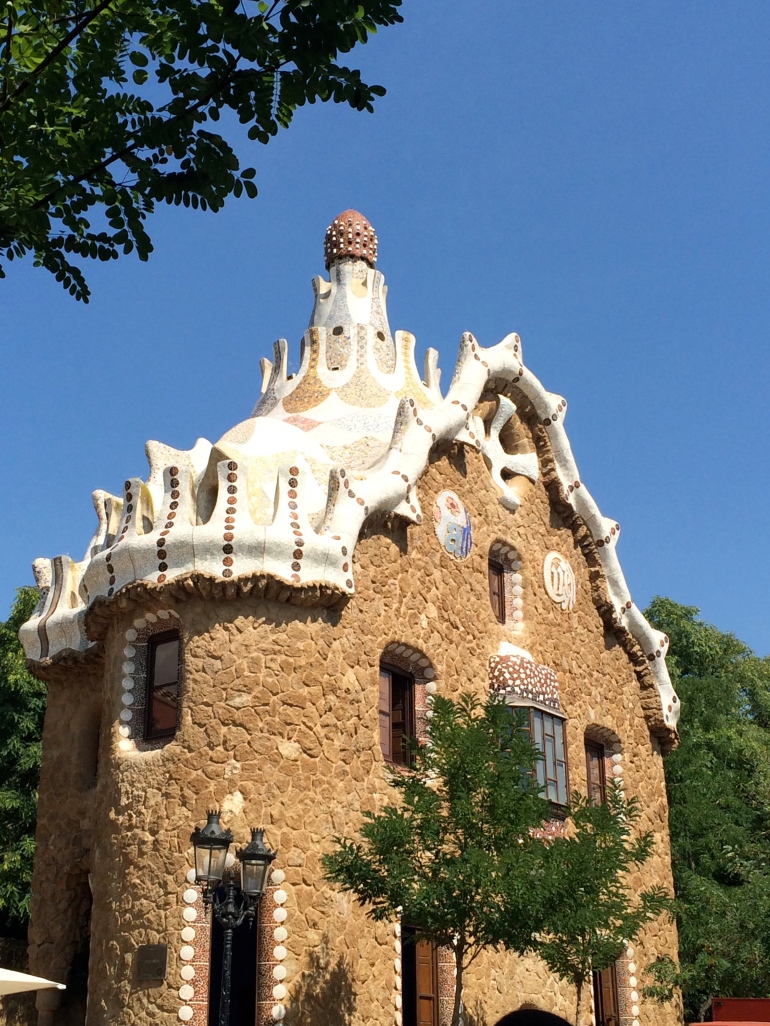 Soon we are off to retrace our steps — and make new footprints — in the region. Stay tuned for a Costa Brava update, as well as info and inspiration from our other recent journeys around the world.

Copyright © 2016, 2017, 2018, 2019, 2020 by Barbara Kimberly Seigel and BarbaraKimberlySeigel.com. All rights reserved. Unauthorized use and/or duplication of this material without express and written permission from this site’s author and/or owner is strictly prohibited.