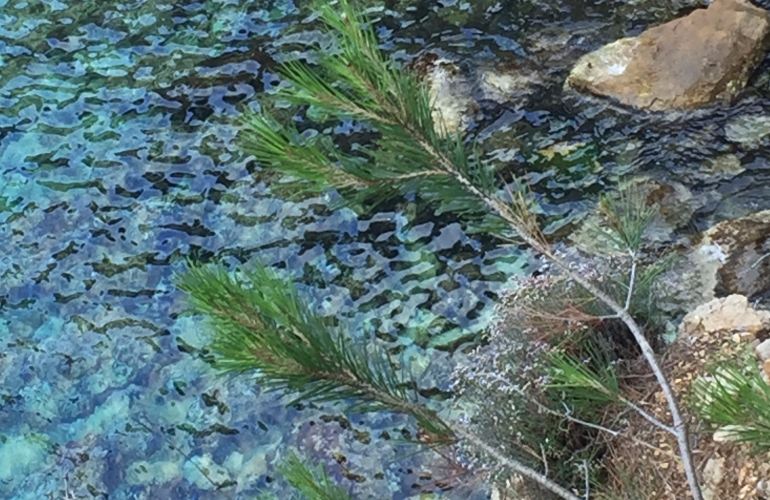 My husband and I recently returned to the Costa Brava (and to Hostal Sa Rascassa) with two goals in mind — to relax (and ultimately recharge) and to explore parts of the coastal region we hadn’t uncovered during our visit nearly three years ago. While six nights of vacation flew by in what seemed like an instant, we were able to achieve both — the first almost immediately as we stepped onto the terrace outside our room marked with our name and took in this view of the Aiguafreda cove, which was just as perfect as we remembered.

Where to Stay: Hostal Sa Rascassa

Staying at Hostal Sa Rascassa was a no-brainer (and should be for anyone visiting the region), as this wonderful nook in the municipality of Begur was one of the reasons we were so anxious to return to the Costa Brava. As we settled into a familiar daily routine (check out my previous trip report), we were reacquainted with all the lovely people who worked at the hotel and made our stay so inviting. We knew that each day would begin with breakfast in the stone garden below our window. We had another delicious dinner (this time of langoustines, grilled ‘rascassa’ fish, and salad with jamón ibérico) at the Sa Rascassa restaurant that draws patrons to the cove for lunch and dinner. We knew that we had returned to our seemingly secret hideaway that made us feel at home on the coast of the Catalonia region in northeast Spain. 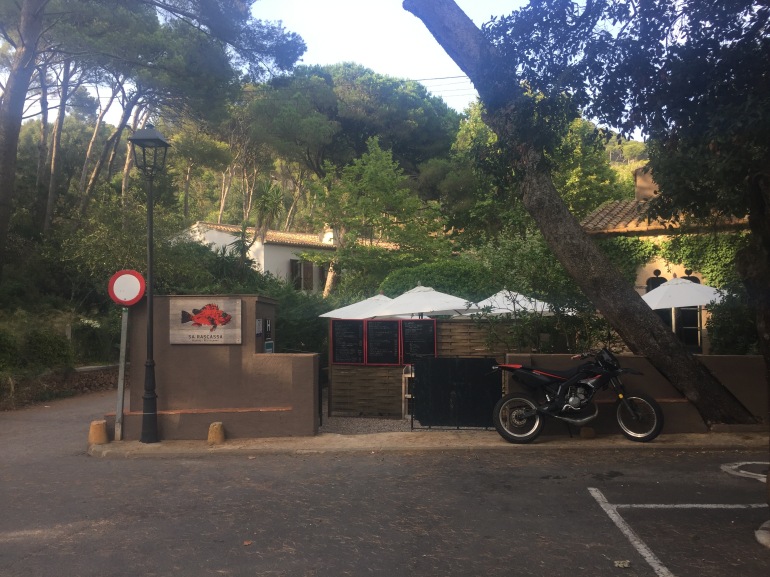 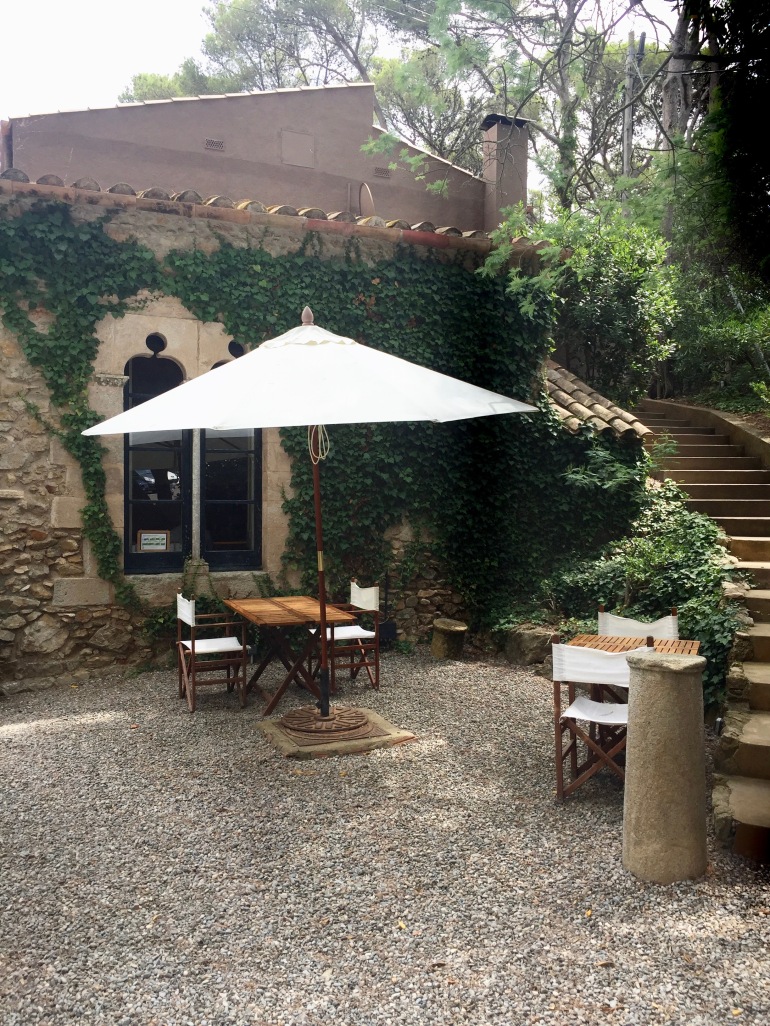 The only surprises here were welcomed ones — air conditioning and extra lighting in the rooms, an honesty bar, and other small touches implemented by Oscar (Sa Rascassa’s owner) that made our stay even more enjoyable.

Where to Relax: Cala d’Aiguafreda and Sa Tuna Beach

Sa Rascassa sits in the Aiguafreda cove of the Mediterranean, and there are few experiences more serene than ambling down to the water — where snorkelers and scuba divers often get an early start each morning — and walking along the familiar sea cliff with the sound of waves crashing against the rocky shore. 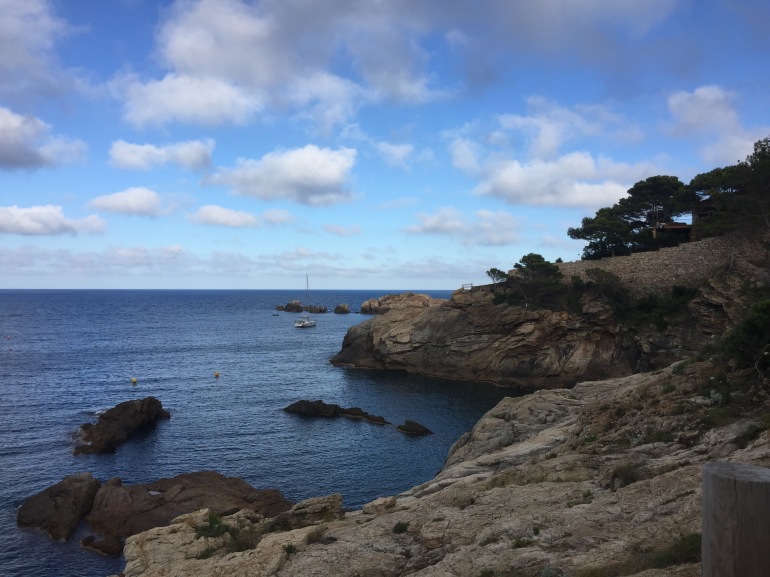 Along the way, is this stone staircase leading down to the rocks, which are perfect for sunbathing, diving (we’re not that adventurous), and taking in the natural beauty.

The sea cliff that leads south of Cala d’Aiguafreda ends at Sa Tuna — the unpretentious, somewhat rocky beach (I strongly recommend water shoes) where we once again plopped our towels down and joined the friendly locals and travelers in the July sun.

Behind those boats are shops, homes, and bustling seaside restaurants, including Ca l’Adela, where we (twice!) had a generous and delicious helping of seafood fideua (which is like paella, but with noodles instead of rice) for lunch.

… and this view of the coast, just a bit farther south.

Relaxing on the coast and taking day trips around the region left little time to fully immerse ourselves in the local towns and eat in the authentic restaurants (enough of a reason to return soon!). We did, though, drive several times into the lively and colorful town of Begur (the Catalan village that sits in the municipality of Begur) …

… and ventured roughly 15 minutes northwest into Pals, a beautiful medieval town atop a hill (and adorned with these bright purple bougainvillea flowers that are common in the region).

On our first night, we drove inland (roughly five miles from Sa Rascassa) into the town of Regencos, where we had a fantastic dinner at Restaurant La Calendula.  The restaurant literally had me at hello, as we were greeted with homemade breads and amuse bouches of strawberry in beetroot and fried squash blossom leaves, as well as a welcome cocktail — which we drank before opening a bottle of wine from Empordà (a region of Catalonia). Squid wrapped in squash blossoms, white asparagus in a foie gras cream, duck, and Galician beef followed. And the meal ended with delicious petit fours and a complimentary St. Germain champagne cocktail. The food and drinks were only rivaled by the atmosphere, as we sat inside at sunset overlooking a garden that also accommodated diners.

Where to Feel the Past in the Present: Girona

We could not return to the region without visiting Girona, which we fell in love with during our previous trip. We walked across the bridges from the new city (where we parked our car) into the old, where we could spend hours simply traversing the cobbled streets and taking in the history and splendor of the big town/small city (and, for my husband, taking in the burgeoning cycling culture present in the bike shops and cafes). The feeling that comes over us here can best be described as magical. 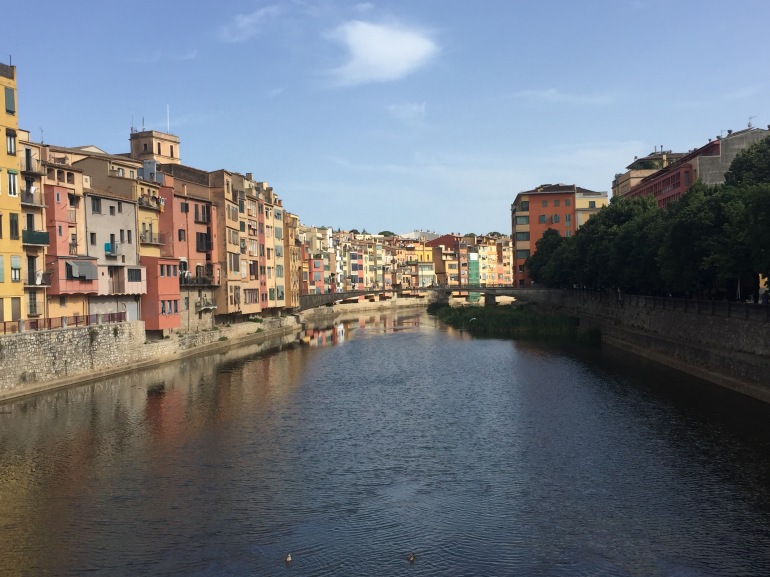 We didn’t have enough time to return to the museums (like the wonderful Museu d’Art de Girona) that preserve the city’s rich history, but we had two fantastic dinners here — the first with a good friend at Occi, where we shared a bottle of Priorat and indulged in dishes like scallops with grilled vegetables and romesco sauce. For the second (and our final vacation dinner), we returned to Nu — where we dined on our last visit — for local wine and cheese, beef filet with truffle parmentier, and scallops with iberian pork (among other items). The restaurant was surprisingly bustling for a Monday night, and we definitely weren’t disappointed.

We skipped dessert at Nu and instead opted for pistachio gelato — which we ate on the steps of the basilica under the stars — from a local shop.

Girona, I just can’t quit you.

Where to Eat: Barcelona

We ended up avoiding a somewhat rainy day at the beach by making the roughly two-hour trek to Barcelona, where we had planned to dine at Bar Cañete (our favorite tapas restaurant). A first visit to Barcelona warrants an afternoon at the incredible Museu Picasso and ample time to take in the colorful Gaudi art and architecture around the city. But, as we only had an afternoon there on this return vacation, we ended up meandering through the touristy streets of El Raval and Barri Gòtic, as well as El Born (where we wish, along with Gracia, we got to spend more time). We also got to stand on the sidelines of the awesome Barcelona Pride Parade — smaller, but just as celebratory as the NYC Pride March we’re used to outside our West Village window.

As for Bar Cañete, even at a rather early 8 pm, the destination-worthy restaurant was packed. We sat at the bar, where we joked around with the friendly staff (well-versed in taking selfies for customers from around the world) and indulged in ham croquettes, fried eggplant with honey, braised octopus, scallops with bacon, and a Crema Catalana for dessert. A superb meal to say the least.

Where to Appreciate Art: Figueres

We visited the Gala Dalí Castle in Púbol during our previous Costa Brava vacation, so this time we decided to drive about an hour north from Sa Rascassa to Figueres — the birth place of artist Salavdor Dalí and home to the massive Dalí Theatre-Museum, which Dalí apparently wanted built upon the ruins of the Municipal Theatre that had been destroyed at the end of the Spanish Civil War. Outside and inside, architecture and art within … the museum (which houses Dalí’s tomb in the center) is surrealism at its finest. (Plus, next door is a separate exhibition of the intricate and, yes, surreal, collection of drawings and jewels that he designed.) 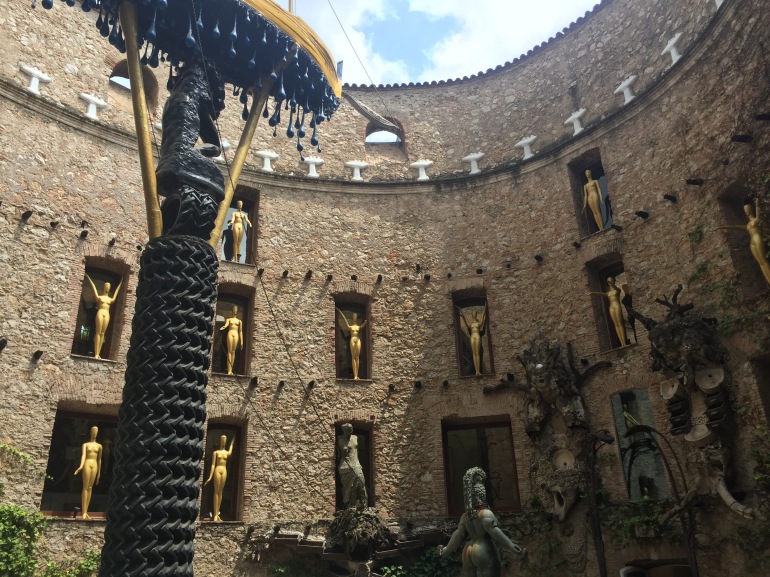 Where to Explore: Cap de Creus and Cadaqués

If vistas are your thing (they’re everyone’s thing, right?), then a drive on a narrow, winding road from Cadaqués (which is a roughly 50-minute drive east of Figueres) to Cap de Creus National Park is a must (although the drive is certainly not for the faint of heart). Here, on the cape that serves as the eastern most point of Spain and is only 16 miles from the French border, we felt as if we were on the edge of the Earth (if, obviously, there was an edge of the earth). The sweeping views of the rocky coastline fading into the horizon and merging with the sea create an image that would probably be even more breathtaking on a sunny day. 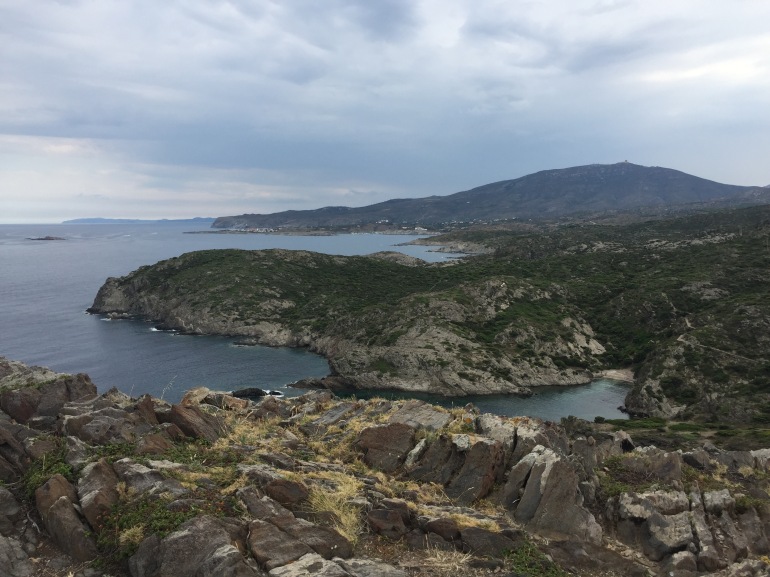 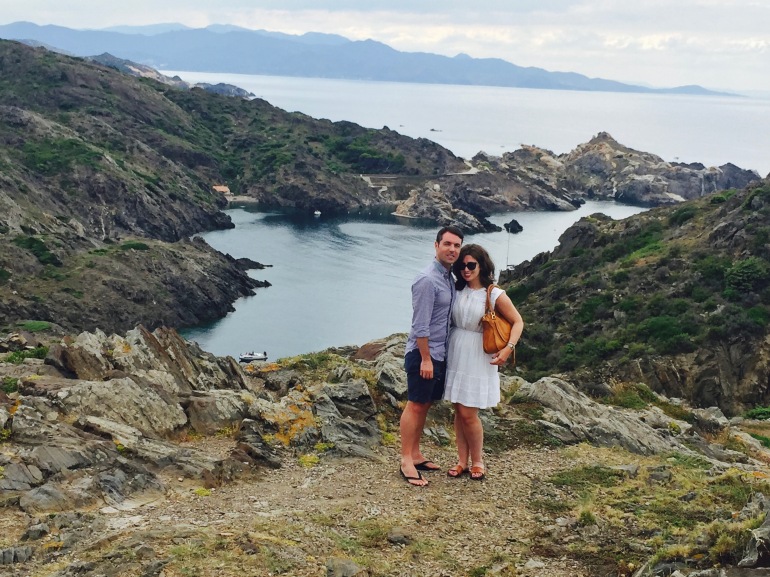 We drove back down the narrow road into Cadaqués a few hours before sunset and roamed around the coastal tourist town rich with French influence.

After watching the slowly setting sun glisten upon the water and meandering through the narrow streets lined with shops and outdoor cafes, we made it to Compartir, where we sat in an impressive outdoor courtyard and shared five dishes (a deconstructed caprese salad, anchovies with pine nuts and honey, the chef’s signature tuna cannolini, scallops, and monkfish). Compartir might literally mean “to share,” but I could have easily inhaled our delicious hazelnut coulant dessert in seconds myself. It is no wonder this restaurant is heralded as a top dining destination in the region because we had, simply put, one of those incredible can’t-miss meals.

Though we purposely retraced many of the familiar steps we took on our last Costa Brava getaway, there certainly wasn’t a lack of new towns, museums, restaurants, and natural wonders to explore … and are still left to discover on our next visit to the region. Until then, vibrant images of the charming cities and towns, picturesque beaches and coves will keep me Costa Brava dreamin’.

Copyright © 2016, 2017, 2018, 2019, 2020 by Barbara Kimberly Seigel and BarbaraKimberlySeigel.com. All rights reserved. Unauthorized use and/or duplication of this material without express and written permission from this site’s author and/or owner is strictly prohibited.